Price Gouging at the Pump: An Economist Weighs In 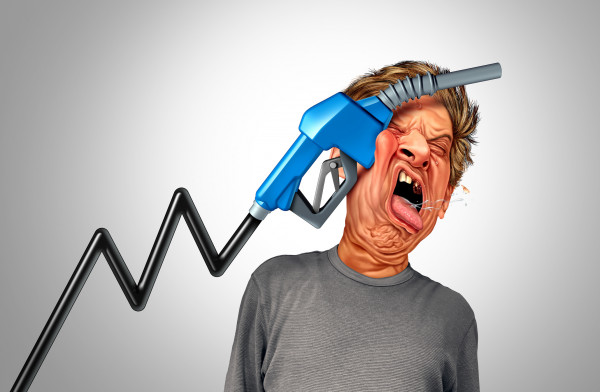 You don’t have to be an economist to notice the disastrous effects of rising fuel costs. Each day, transport fleets and ordinary consumers are feeling the pain of higher prices at the pump. It’s hard not to feel like you’re being price-gouged each time you fill your tank. But who’s really doing the gouging?

There is a popular perception that fuel companies are taking advantage of consumers for profit. This view has even been proposed by prominent figures in our government. To understand the economics of fuel pricing and consumption, Dan North, Chief Economist at Allianz Trade North America, offers this chart: 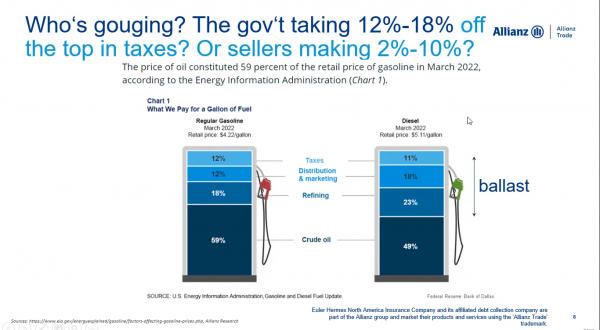 According to the figures displayed above, government-imposed taxes account for between 11-12% of the cost consumers pay for fuel, while sellers profit by as little as 2%. In North’s view, governments should take their fair share of the blame for supposed price gouging. But what about the record profits announced by oil companies like Exxon as of late?

“They had better make record profits—they are selling products into the largest economy in the history of the world,” North explains. “The idea of record profit is meaningless without considering sales. Generally speaking, [their net margin] was less than across other industries.”

North also points out that Exxon is listed on the S&P500, meaning its profits are tied to many retirement portfolios. Though the price at the pump may hurt, those with retirement investments should be rooting for these companies to make profit. Additionally, 80% of the fuel sold in the US is produced by small independent producers, not the big oil companies. So, what about point of sale? Are gas stations gouging consumers?

What are the market conditions driving higher prices at the pump? Find he answers to these questions and more in the Stay In Your Lane Podcast.

Again, North’s figures show that this is unlikely. 57% of gas stations are owned by individual operators and survive on a profit margin of just 2%. Meanwhile, the average margin across all industries is 8%. If consumers are getting price-gouged, gas stations are not the culprit. Plain and simple, oil companies must turn a profit if their business is to succeed. Though their product is one we depend on each day, high prices are affected by market conditions that oil suppliers have little control over.

The energy market is unpredictable, and many popular conceptions about oil prices don’t stand up to scrutiny. The reality is that high fuel prices are the result of complex market conditions—and they’re likely here to stay. Finding dependable supply chain partners is more important than ever for transport operations that hope to navigate these tumultuous conditions. Trust the brokerage experts at Triple T Transport for the best 3PL services in the industry.